Land Rover can ill afford to get the second-generation Range Rover Evoque wrong. The baby Rangie being one of Nigeria’s top-selling mid-size luxury SUVs since 2012 and over the last seven years the British car-maker has managed to shift an incredible 800,000 of them worldwide, making it the fastest-selling Land Rover of all time. It’s no surprise then that with demand still strong for the current version, the new Evoque looks unmistakably like, well, an Evoque with a little Velar thrown into the mix. Arriving down under around the middle of 2019, the MkII Evoque is set to be offered with a full range of 48-volt mild-hybrid powertrains, with a plug-in following 12 months later.

If you’re hoping for a complete in-depth review of the Range Rover Evoque you’ll have to wait just a few more months before we bring you a proper first drive review early in 2019.

Until then, everyone will have to make do with a preview of how the Evoque’s shaping up following the briefest of drives around a surprisingly technical off-road course below some rail arches in east London.

It’s far from a convincing drive route and presumably tailormade by Land Rover to flatter its baby Range Rover but, nevertheless, in the sub-zero temperatures of Europe today, the driving remains a challenge.

The event, staged just hours before the global unveiling of the Evoque last week, gave some access to the small Range Rover than any car-maker would normally permit, allowing the sampling of the redesigned SUV’s new technology. 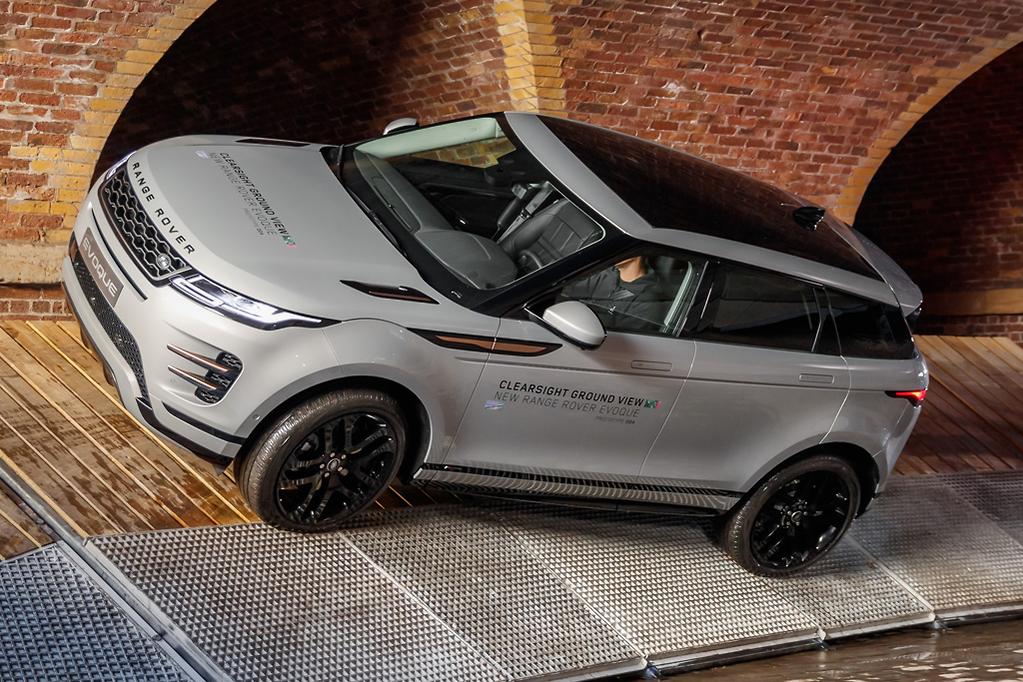 Just to recap, despite looking eerily similar to the current model, the new Range Rover Evoque’s body is 99.9 per cent new, with just the door hinges carried over.

In the metal it’s easier to appreciate the heavy influence of the Range Rover Velar in its smaller brother’s cleaner lines, integrated grille and slimmer front and rear lamps.

Land Rover says the Evoque’s Premium Transverse Architecture (PTA) platform is ‘all-new’, but we think that’s a small fib. In fact, the PTA is actually a heavily modified version of the current car’s D8 underpinnings that can trace its roots back to Ford.

That said, the PTA has received some major tinkering. Not only has it now been adapted for electrification, there’s been a more sophisticated new integral link suspension grafted into the rear-end, and it’s claimed to provide for both a better ride and more agile handling. 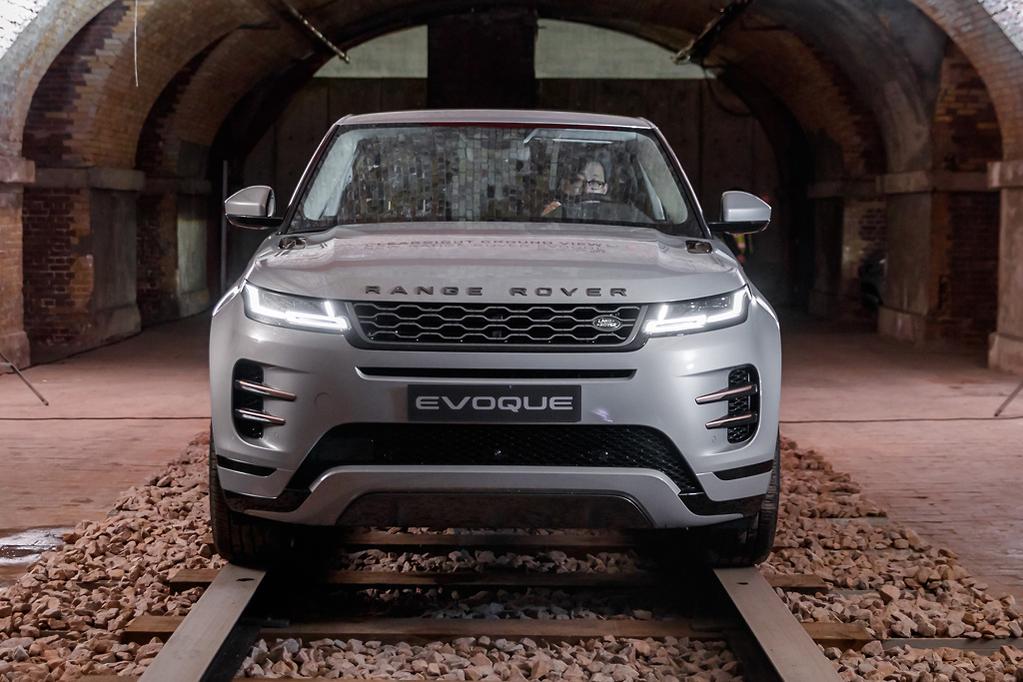 At the front, the entire substructure has been swapped to mount the engine lower in the chassis, while there’s now all-new MacPherson front struts and lots of expensive-looking aluminium components.

So what’s missing? Land Rover says air suspension is a no-no for the second Evoque as packaging would have sacrificed interior space.

Speaking of which, measuring in at 4371mm long, 2100mm wide and 1649mm tall, the new Evoque mirrors the old car’s proportions.

But it now rides on a 2681mm wheelbase — 21mm longer than before — liberating an extra 20mm more kneeroom for passengers in the second row. 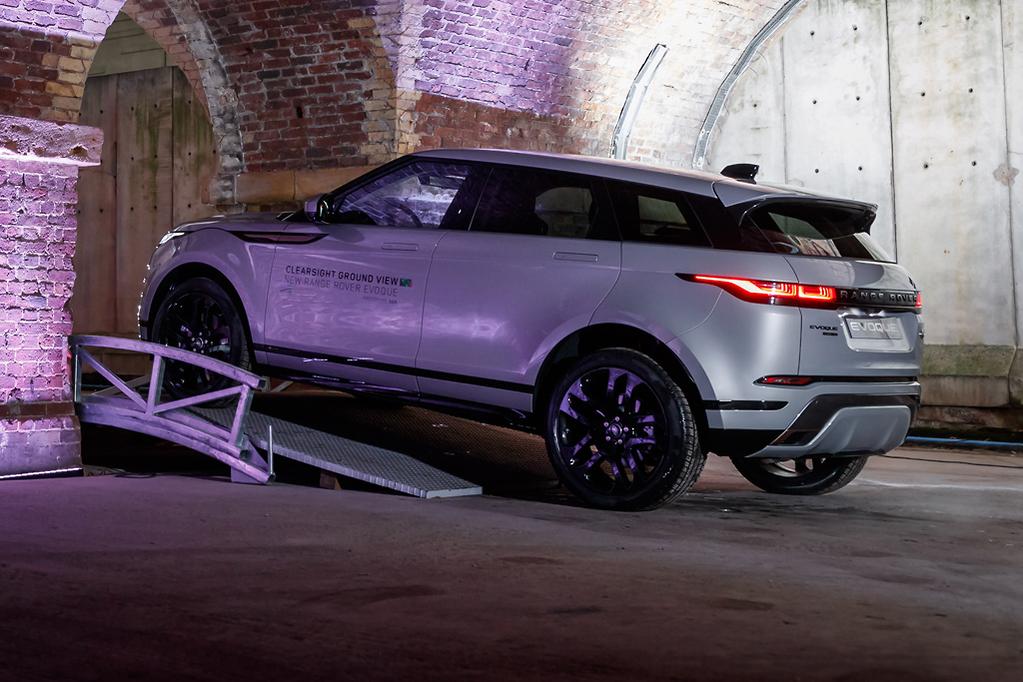 Inside the prototype Evoque, the baby Rangie doesn’t feel as cramped as the old model — especially when the full-length (and now opening) panoramic sunroof is fitted, flooding the cabin with light.

In the second row, headroom is decent, but legroom remains a premium — not that it matters too much, says Land Rover, because most Evoques will be owned by couples without kids.

Up front is where there’s been the biggest improvement, because the Evoque is the beneficiary of the huge improvements introduced by the Velar, which donates its twin 10-inch infotainment screens that are matched with a 12-inch digital instrument cluster.

As in the Range Rover Velar, the screens are clear and easy to use, with the lower one operating the climate control and driver modes while the top one manages the entertainment system. 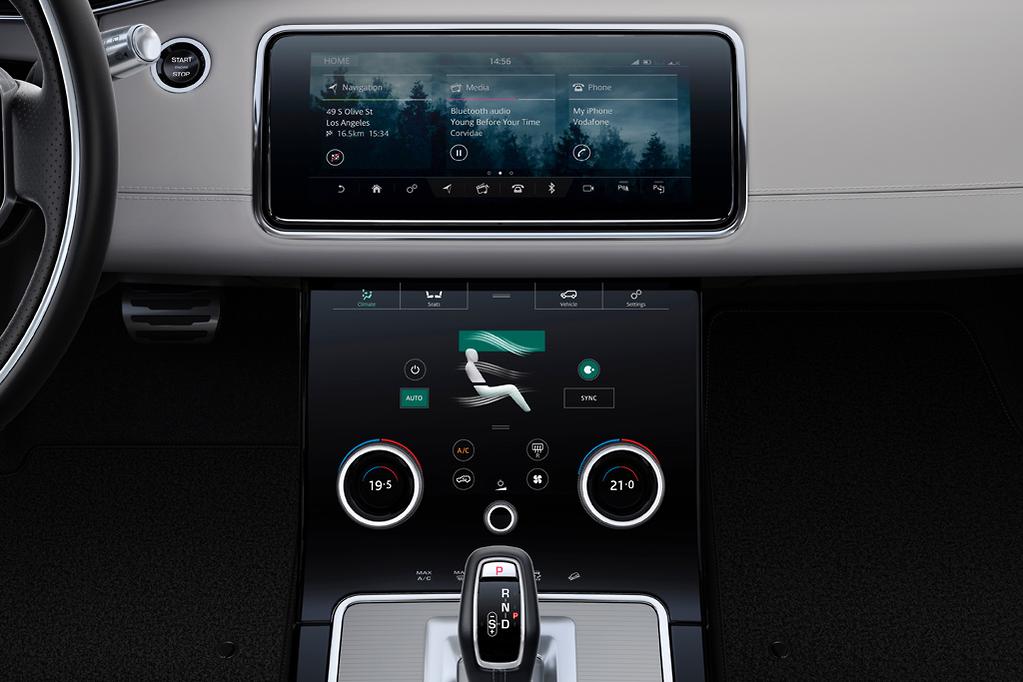 Matched with a clean, contemporary design, we’d now suggest the baby Range Rover might finally have the edge over the competition inside, where there’s a new wool blend seat trim and a faux leather option sourced from eucalyptus trees for vegan customers.

The outgoing Range Rover Evoque’s poor rear visibility has also been addressed with the introduction of a smart interior rear-view mirror that uses a camera mounted in the shark fin antenna to project a full-width live broadcast of the view behind on the mirror.

Other new camera-based tech that’s genuinely useful is Land Rover’s new Clearsight Ground View system that uses two cameras in the door mirrors combined with another in the grille to provide an image that helps you ‘see’ through the bonnet to the front wheels.

Superimposing said rims on the live feed should see an end to kerbing the Evoque’s alloys in urban environments as it allows accuracy and precision that some drivers lack even after a lifetime of driving. 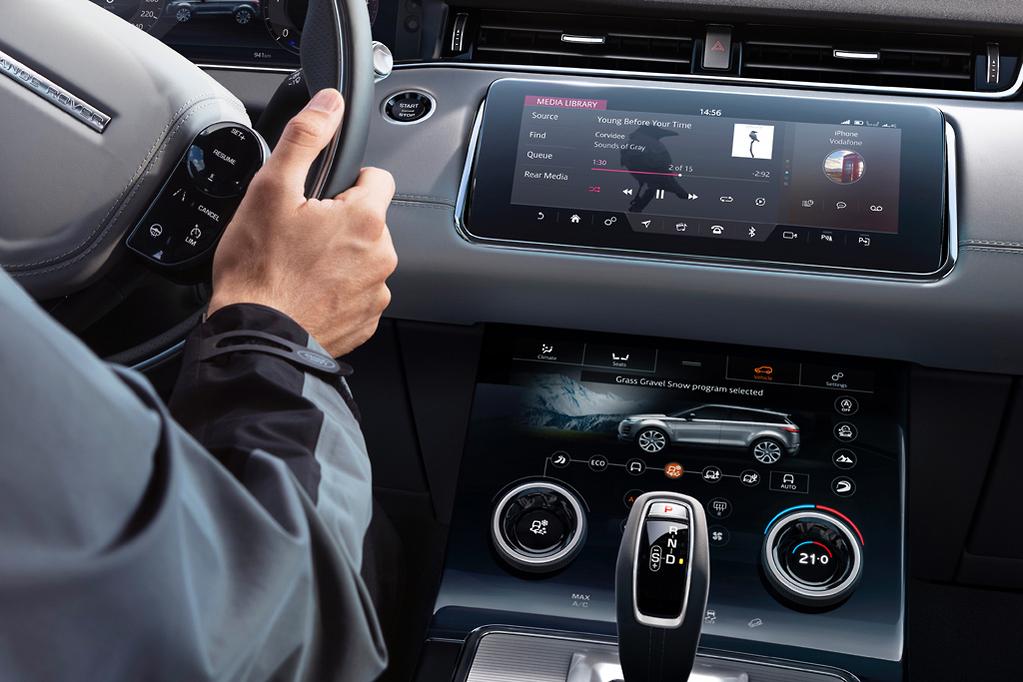 Nigerian buyers will also get the choice of a turbocharged 2.0-litre Ingenium petrol engine outputting either 147kW, 184kW or 220kW. 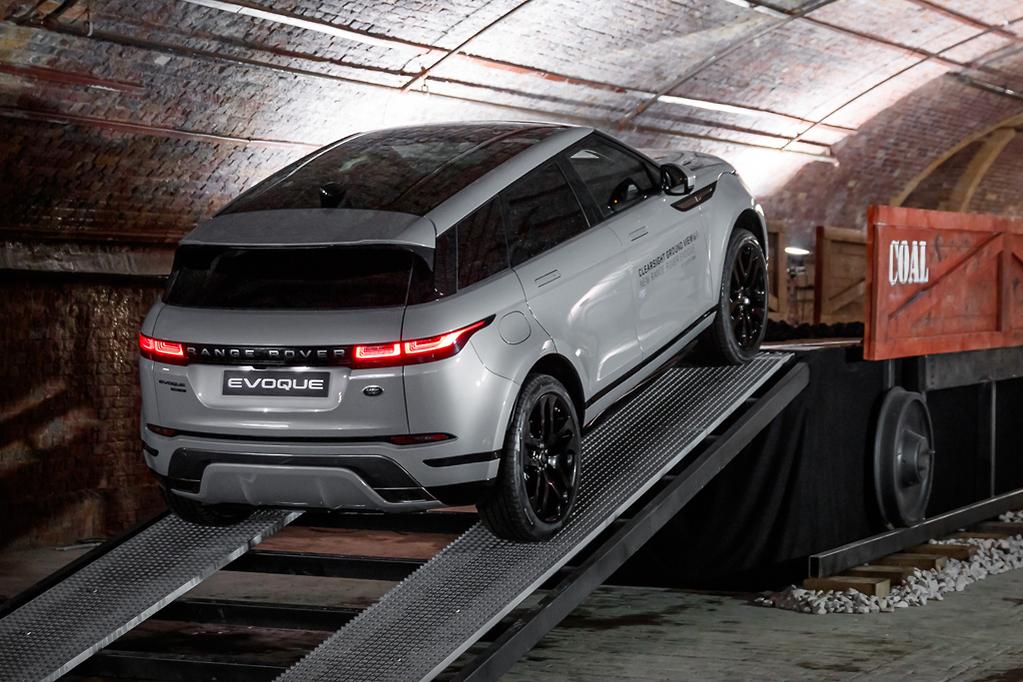 Boosting efficiency in both petrol and diesel models is the MHEV’s 11kW belt-driven starter generator that claws back energy under braking while allowing the Evoque to coast at speeds below 17km/h, feeding an underfloor battery cell. The same system then is capable of firing the engine back up far more quickly than traditional idle-stop system.

Today, perhaps the most useful aspect of the system is the effortless torque available as soon as you breathe on the Evoque’s throttle. Climbing slowly up the ramp, the small electric motor gives us a helping hand by ‘torque filling’ the pause before the turbo comes on boost and, when it does, continuing to assist the engine for a fatter torque peak.

The system feels imperceptible but gifts the diesel the sort of step-off urge owners of large naturally-aspirated V8s will be familiar with, although the diesel’s actual performance once you get going won’t be troubling any HSVs on the open road.

Land Rover claims the most powerful (132kW) diesel auto is only capable of 0-100km/h acceleration in 9.3 seconds and a top speed of 205km/h. 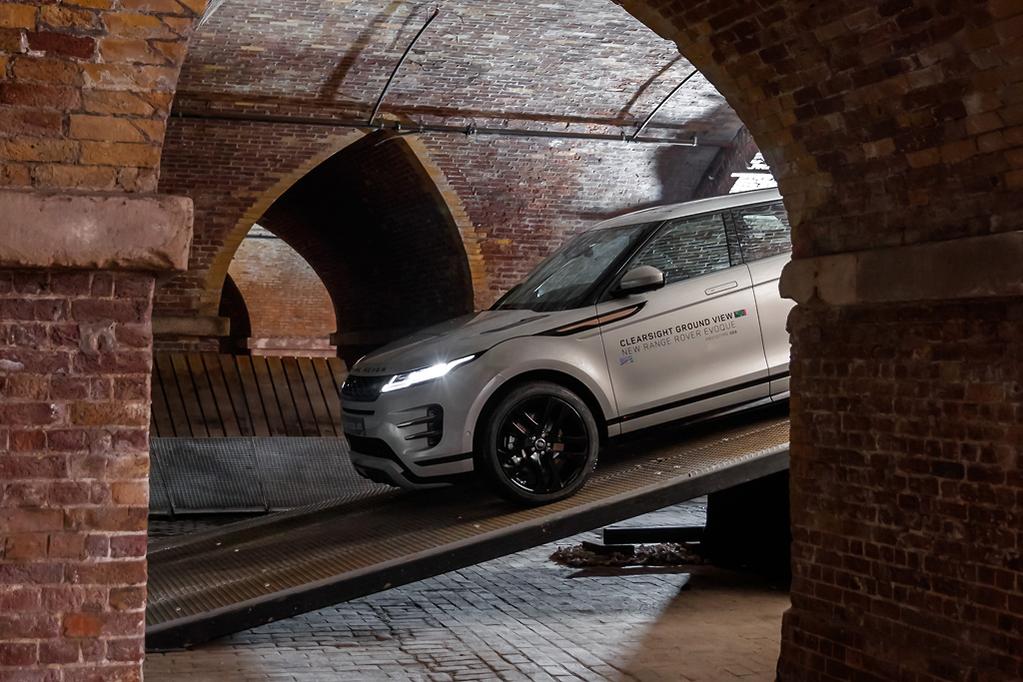 Cresting the top of the ramp, there’s a nasty vibration as we lean on the brakes for a controlled descent. The noise, said to be caused by brake discs and pads that hadn’t had the chance to bed in properly, is particularly rude alongside the high level of refinement in the cabin.

In the past the Ingenium diesel and petrol fours have both come in for criticism due to their raucous nature but engineers have been far more successful in suppressing their voice this time round.

That’s partly because the engine is now mounted lower so there’s less lateral rotation when you rev it. This is claimed to significantly reduce the amount of both the noise and vibration entering the cabin.

As we attack the next set of ramps set to test axle articulation, the compact Rangie lifts its rear wheel but there’s not a creak to be heard through the body.

Land Rover says it has increased rigidity by more than 13 per cent. With a wheel off the road it’s also possible to test both the Evoque’s updated Terrain Response 2 and the new rear axle that features a pair of clutches to deliver more efficient torque vectoring. 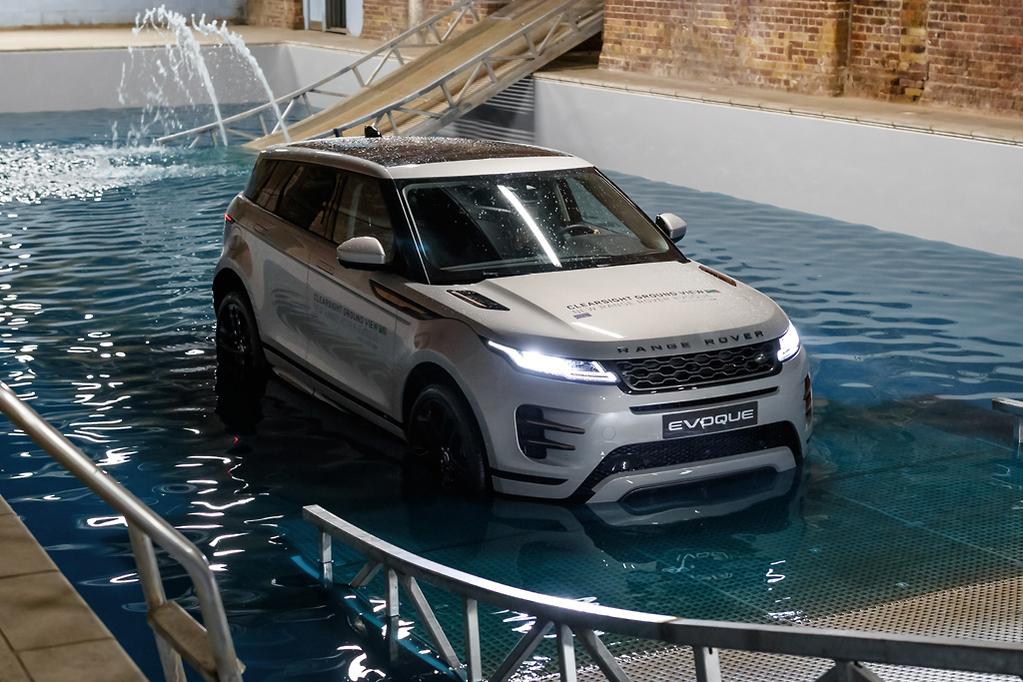 Neither are fazed as the front right and rear left wheels are left floating in space briefly and both software and hardware work in harmony to smoothly resume forward momentum.

The steep inclines and declines also show off the Evoque’s fine approach (19.5 degrees) and departure angles (30.6 degrees). Then a final dip in a deep improvised swimming pool (yes, really) to test the Rangie’s 600mm wading depth (+100mm over the old one) cement the Evoque’s off-road credentials as among the best in its class.

The new Evoque can also now tow up to 2000kg — a useful 500kg more than before – and one chassis engineer excitedly declared the clever rear suspension, which separates lateral and longitudinal forces, should also see it lead the class for dynamics and ride quality, even on the huge optional 21-inch rims. 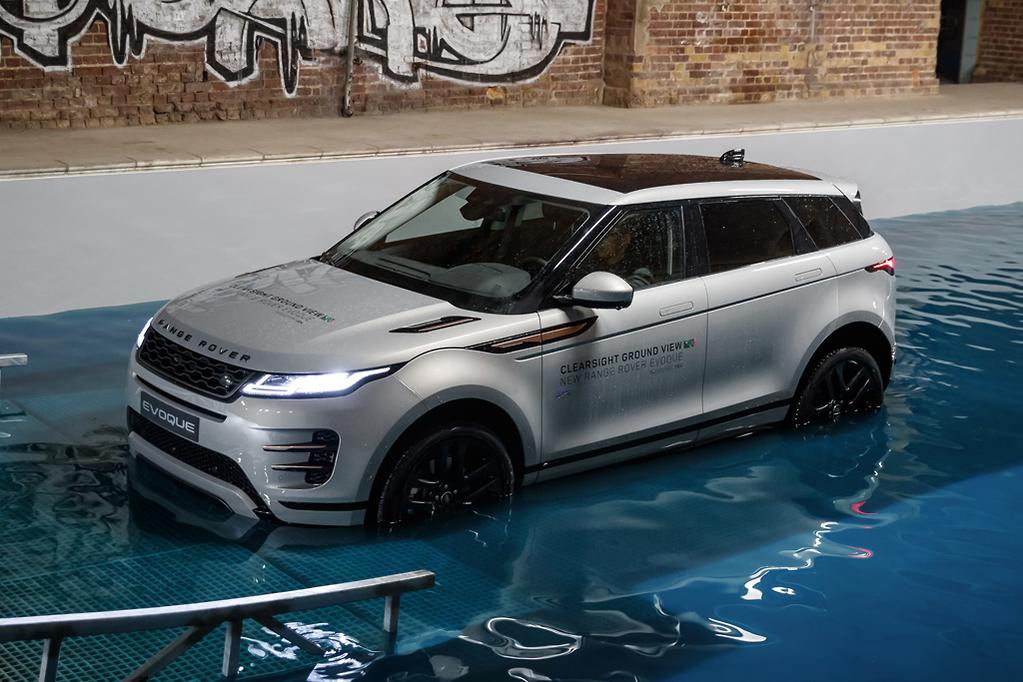 Speaking of options, Land Rover will offer the Evoque in either ‘Evoque’ or sportier ‘R-Dynamic’ trim levels with S, SE and HSE option packs.

What’s missing is the full digital instrument cluster, head-up display and driver-assist programs like adaptive cruise control. So, like the bigger Range Rover Velar, the $64,640 people will pay for the cheapest 110kW all-wheel drive diesel is far from representative of what most buyers will fork out.

Because even after our briefest of drives, it’s clear the second-generation Range Rover Evoque looks and feels like it just might have what it takes to be a true class-leader. 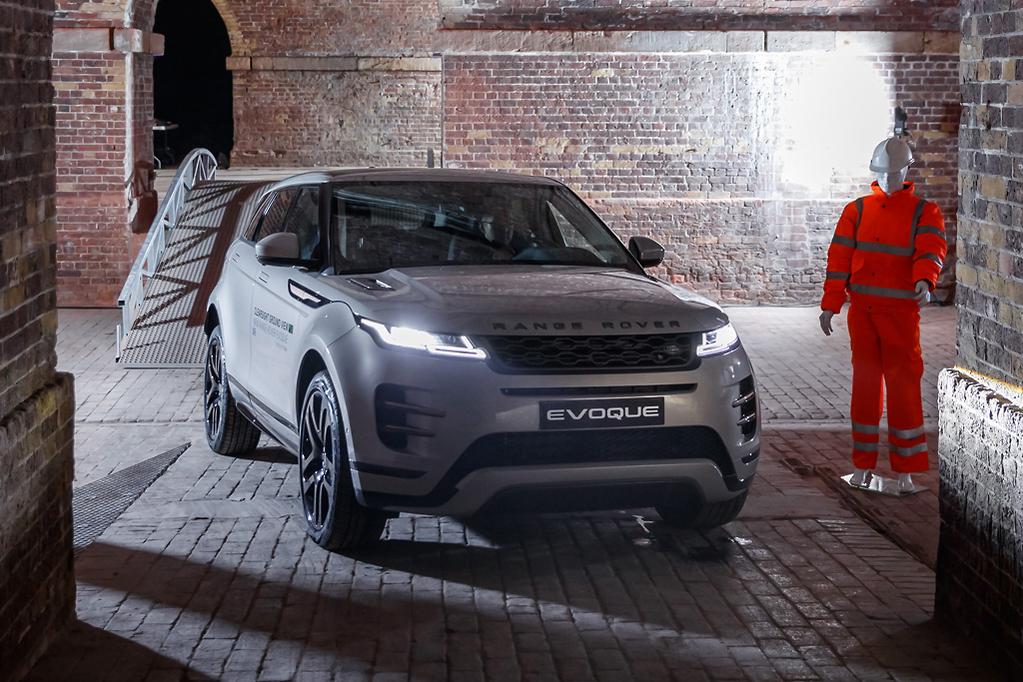