The 2017 Mercedes-Benz AMG C63 S Coupé speaks fluent Spanish. Just ask any one of the couple dozen niños and niñas waiting for their school bus in southern Spain last week.

A rowdy exhaust note was leading my charge through the olive orchards that dot the mountains north of Gibraltar, and the locals were taking notice. The Benz’s quad tips roared, barked, popped and crackled as I powered through each corner, causing farmers, construction crews and bicyclists to pause and gawk at the matte silver coupe as it zoomed by. Then I rounded a corner to find the cluster of youngsters at their bus stop. Under assault from the sight and sound of my snorting mount bearing down on them — a vehicle of this caliber is rare in this part of the country — the kids froze in wonder. I slowed to a crawl, cautiously passed them, and then mashed the accelerator to the floor. Both rear tires, subjected to the twin-turbo V-8’s full 516 lb.-ft. of torque, squealed free of the pavement’s grip as the exhaust pipes screamed adios! The children punched the air with tiny fists and cheered with glee, each one clearly understanding the C63 S Coupé’s powerful message.

Even sitting still, this car’s reason for being is clear to any enthusiast because of the iconic AMG badging. It all began with the 1995 Mercedes-Benz C36 AMG, the offspring of the mild-mannered C-Class sedan and German tuning firm of AMG, at the time a separate company not yet part of the Mercedes-Benz corporate portfolio. That high-performance sedan, which was sold through the Mercedes dealer network, was a success, and soon afterward the German automaker took controlling ownership of AMG as its exclusive tuning division. 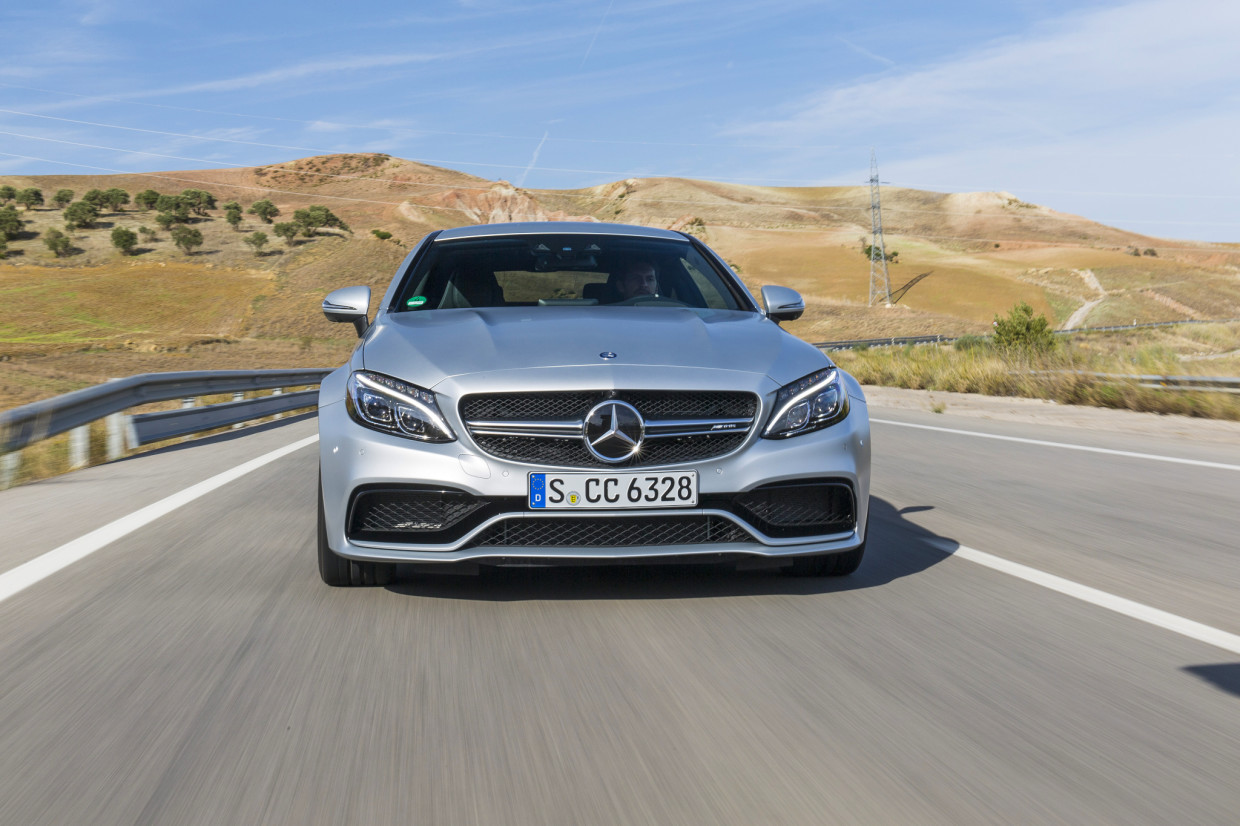 Today, its reputation firmly established both on the race track and public roads, Mercedes-Benz AMG offers a number of polished high-performance variants, ranging from the exotic AMG GT S coupe to the luxurious AMG S63 sedan. Newly introduced to the lineup is the 2017 Mercedes-Benz AMG C63 S Coupé, built to appeal to the most passionate automotive enthusiasts and competing primarily with BMW’s M4 and Audi’s RS 5, other two-door versions of a sedan sibling modified to be more aggressive and sporty.

It is hard to find fault in the standard C-Class sedan. In fact, it’s one of the finest compact sedans on the planet, so the team at Mercedes-Benz AMG had an excellent platform from which to begin its effort to mold a performance coupe version. The team began by widening the stance and track (by 2.51 inches in front and 2.59 inches in the rear) and fitting a wheel/tire combination that stuffs the wheelwells. The program also required for almost all of the vehicle’s steel bodywork to be re-sculpted to accommodate the larger radiators, wheels, and exhaust. Only the doors, roof, and rear decklid are shared with the four-door C-Class. The final exterior touch is a tastefully small rear spoiler, mounted on the decklid.

That “63” on the trunk, by the way, is a marketing term and no longer refers to the engine’s displacement. It was originally designated for vehicles with the automaker’s wondrous naturally aspirated 6.2-liter V8, but this new Coupé is fitted with a forced induction 4.0-liter engine, a full 2.2-liters smaller in size. Yet there’s no reason to apologize, because the C63 S Coupé’s twin-turbocharged V8 maxes out at 503 horsepower, not to mention that 516 lb.-ft. of wheel-spinning torque. A wet-sump version of the engine that powers the AMG GT S, it’s mated to a standard AMG Speedshift MCT (multi-clutch transmission) 7-speed that sends all of the power to the rear wheels (4Matic permanent all-wheel drive is not an option). AMG Drive Select, with five different driver-selected modes, controls how the primary controls react to throttle and steering inputs, while active suspension — AMG Ride Control — offers three different damper settings. 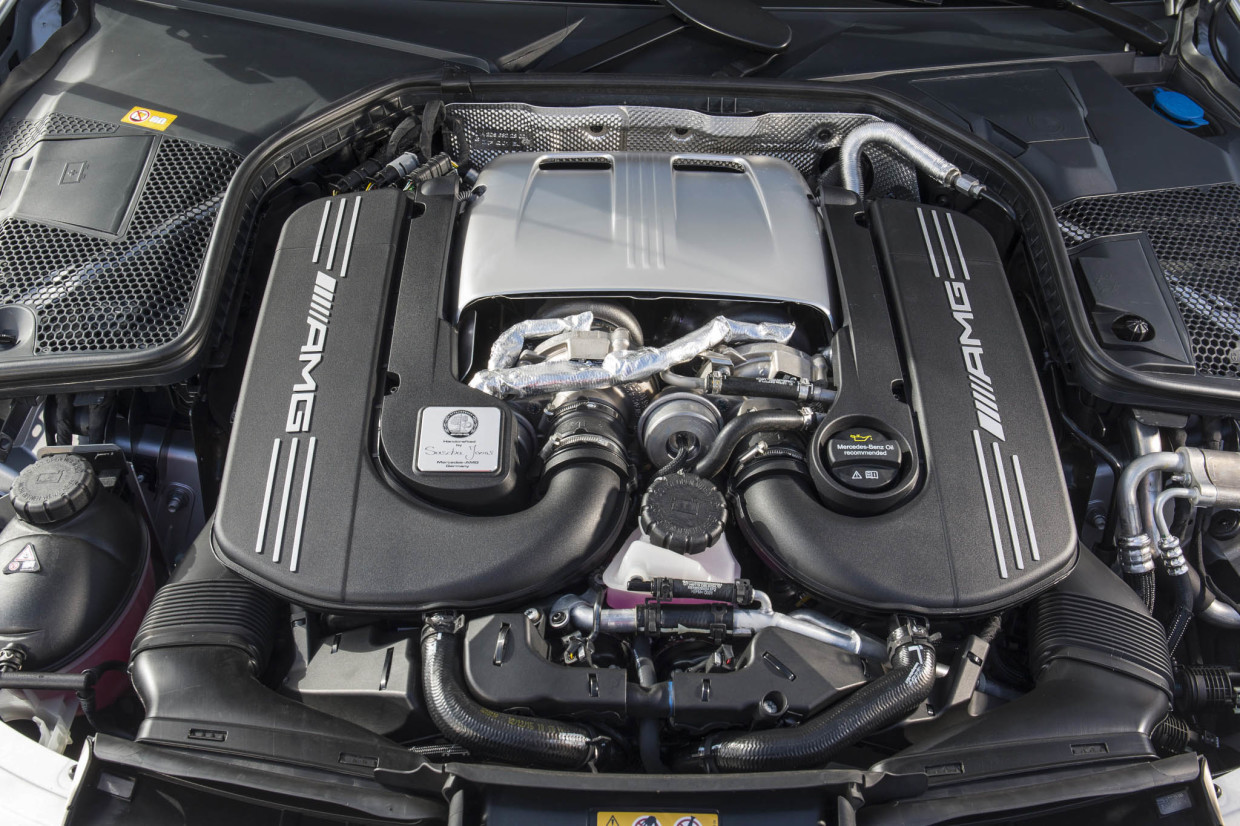 I’m a sedan guy, much preferring the convenience of four doors over two, yet the Mercedes-Benz AMG Coupé fit me just fine. My six-foot two-inch frame slipped into the cockpit with ease, and unlike with some coupes, the doors seemed neither too long nor too heavy. Passenger accommodations felt first-rate, though in an austere, business-like way that pleased the enthusiast in me. The flat-bottom steering wheel, for instance, is unexpectedly thick (almost ridiculously so), but it felt great in my hands. Being a Mercedes, of course there are yards of beautiful leather with contrasting stitching, high-end trim, and controls that offers satisfyingly solid “clicks” each time they’re actuated. A glance around the cabin reveals that there isn’t a single square inch within its confines that offers a hint of bean counting.

Though the materials may be opulent, the Mercedes-Benz AMG C63 S Coupé does not put luxury before sport. Even with AMG Drive Select and AMG Ride Control in their softest settings, the ride is always firm, the throttle response quick, and the exhaust note…well, “vocal” is an understatement. Potholes and major breaks in the pavement are to be swerved around, not hit, and speedbumps and driveways require more than a bit of caution — which is quickly cast aside as the Coupé hits the open road, where the chassis proves to be drum-tight, neither squeak nor rattle to be heard. Don’t get me wrong, as I’d drive one coast-to-coast tomorrow in expectation of a quiet and comfortable trip. 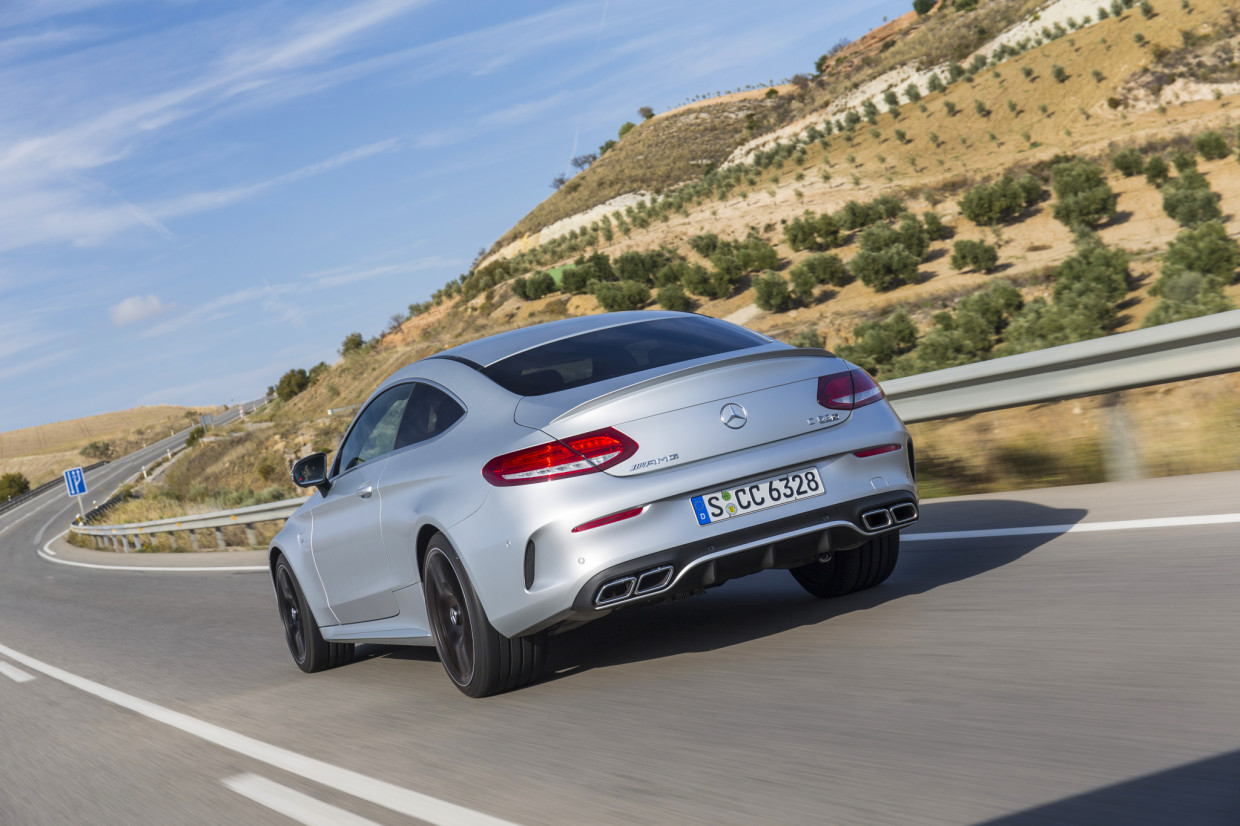 C63 S Coupé Driving dynamics are superb on public roads — it’s what we have come to expect from AMG-tuned vehicles — but what truly leaves a lasting impression is the power from the twin-turbocharged V8. Throttle response (and accompanying exhaust note) is explosive whether zipping through traffic, merging onto a fast-moving highway, or passing slower vehicles over mountain passes. However, be aware: Careless use of this throttle can cause the tail to kick out sideways as well as leave a pair of black stripes on the pavement. Burnouts are an effortless exercise — think of this Benz as a European version of Dodge’s Challenger SRT Hellcat.

Spending a full day driving the Mercedes-Benz AMG C63 S Coupé through the mountains of southern Spain on public roads was phenomenally entertaining, but the real treat was running at Ascari Race Resort, an immaculate FIA-compliant private racetrack near Ronda. The course is over 3.3-miles long and offers 13 right-hand and 12 left-hand turns, all set among beautifully landscaped grounds and picturesque oak trees (tracks like this make my local Willow Springs Raceway or Buttonwillow look positively dreadful).

With a helmet firmly strapped atop my head, I configured the coupe to extract its maximum performance. It’s a quick process: Engage “Race” mode on AMG Drive Select, press the “Manual” mode button for the transmission, and then choose the firmest setting on AMG Ride Control — electronic stability control is still engaged (it can be fully defeated), but this aggressive map allows plenty of sideways wildness (preferably off public roads). 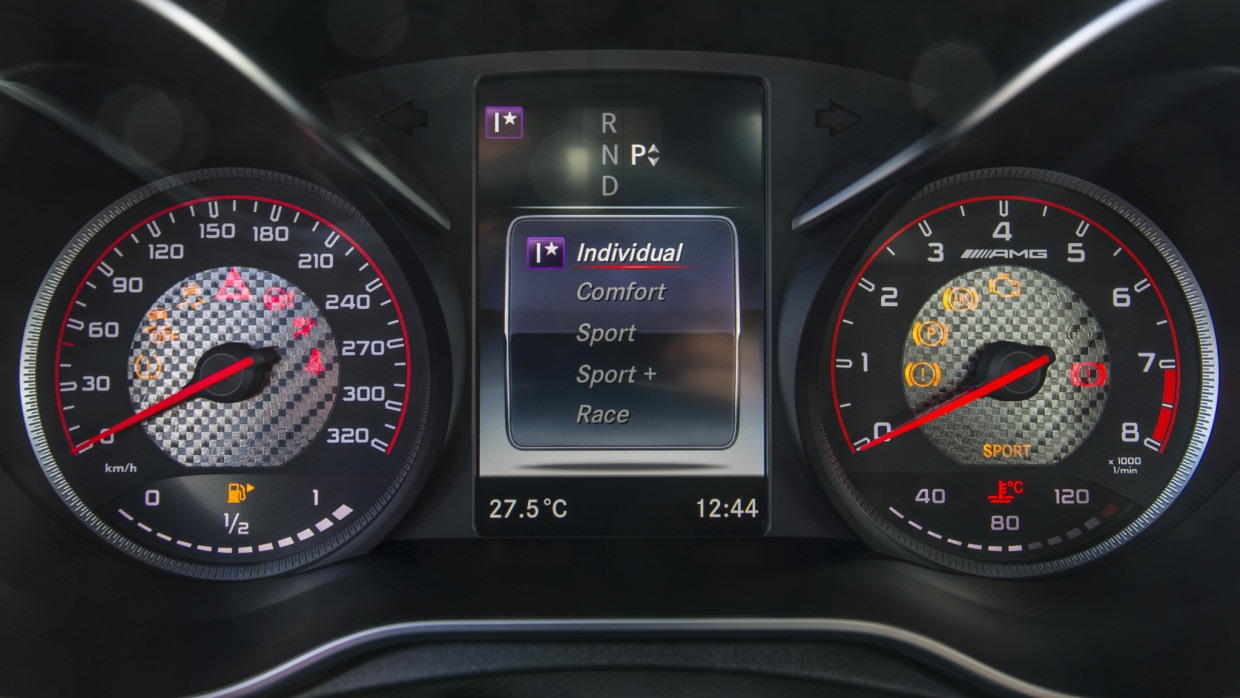 In this configuration the transmission won’t shift until the driver commands it with one of the steering wheel-mounted paddles. But, more importantly, selecting “Manual” mode tells the engine software to run a secret enthusiast-tuned map — algorithms that deliver a much more consistent power and torque curve to redline, which is precisely what professional drivers seek on a racing circuit. (Tobias Moers, head of AMG, tells us that the standard “street” mapping gives drivers the punch they want off the line but then it falls off as engine speeds increase.)

Positioned in a lead-follow train behind a professionally piloted Mercedes-Benz AMG GT S, and told to stay on its bumper, the C63 S Coupé latches onto its flagship sibling like a pilot fish trailing a shark. The C63 S Coupé isn’t as agile or quick as the GT S (only a couple tenths off in the 0-60 sprint, actually), but it did a very respectable job holding its own on the challenging circuit. 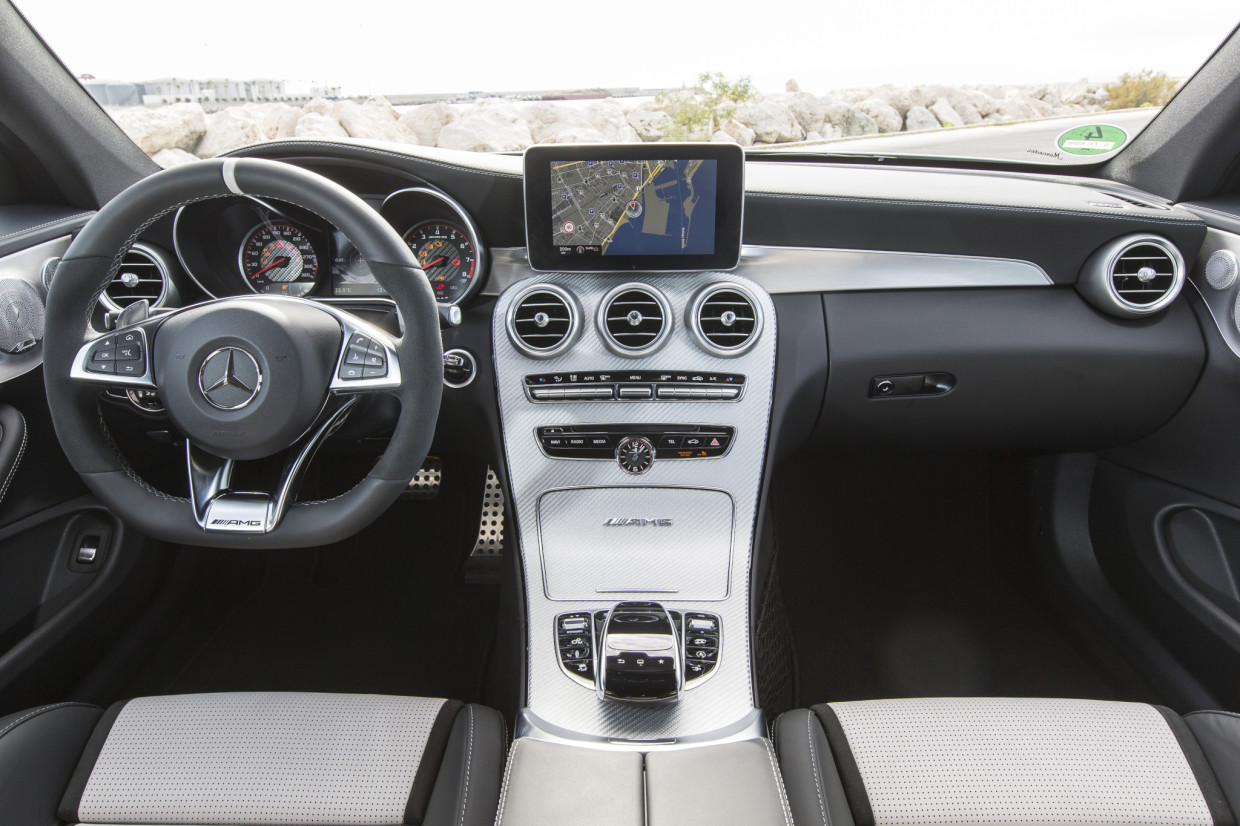 I immediately noticed that the W205 AMG Coupé wasn’t as sharp, or as raw, as its W204 predecessor. Turn-in was every bit as accurate, but there was a new sense of nobleness — consider it a more polished character — that differed from the exhilarating fury of the old C63 AMG Edition 507 Coupe. The new C-Class platform mimics the character of the S-Class more than anything else, and that DNA was difficult to hide on a racing circuit.

AMG completely reengineered the coupe’s front and rear multilink suspension to improve handling (there are no shared parts between the sedan and coupe on the rear design). Mid-corner grip was very good for the first several laps of the big track, as the well-balanced two-door held the race line without missing an apex. Eventually, heat took its toll on the street compound Michelin Pilot Super Sport tires (255/35R19 front and 285/30R19 rear), and the slip angle begins to increase. A quick pressure adjustment on the accelerator pedal easily reigned in the rear end — and I thought that, with the right driver, the C63 S Coupé would be an accomplished drift car. 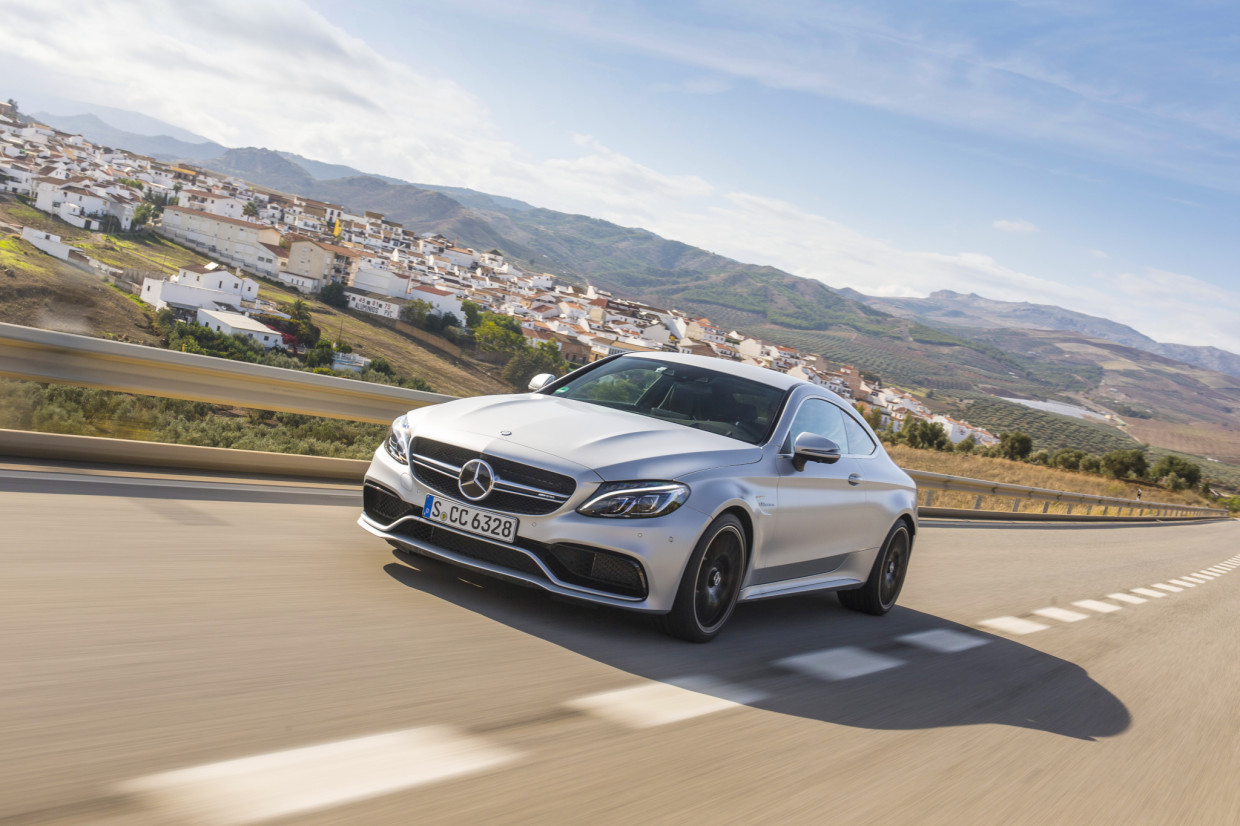 Speed out of the corners was notable — the S model’s standard electronically controlled limited-slip differential put the power down well — echoing my earlier impressions from the public roads. The exhaust note is vibrantly engaging, loud enough to allow me to time my shifts based on its tone. Compared to the transmission’s automatic mode, which distanced me from the powertrain, actuating the gears via paddle shifter allowed a more intimate relationship with the delivery of torque to the wheels. I pulled the tips of my fingers back in chaotic sequence as I attacked each turn, up and down through he gears, but the AMG Speedshift MCT refused to falter. If it’s not perfect, I failed to find the fault.

Braking was also remarkably strong thanks to my test car’s optional carbon-ceramic brake package, which includes six-piston calipers up front. The vehicle’s not-so-svelte curb weight of 3,803 pounds was most evident when braking — not during acceleration or cornering — and though I’m not going to say the carbon-ceramics are necessary (the iron brakes are plenty strong), remember that they help to reduce unsprung weight if you need another reason to rationalize their cost.

Enthusiasts will unquestionably be pleased by the arrival of the 2017 Mercedes-Benz AMG C63 S Coupé, as it indisputably raises the bar in a hotly contested segment that includes the Audi RS 5, Cadillac ATS-V, BMW M4, and Lexus RC F. My seat-of-the-pants impression says that the BMW and Cadillac are still the most gratifying in terms of engagement on the track, but the Mercedes-Benz AMG is the new benchmark for the road. It is beautifully crafted, exhilarating to drive, and it arrives with the most brand cachet — hands-down. And, don’t forget, its luscious exhaust note speaks an international dialect.