Exceptions are rare, so when they happen, enthusiasts take notice and promptly lose their minds. Some recent examples include the 2008 Mercedes-Benz CLK63 AMG Black Series, which was designed by a bunch of lunatics left alone in the office while everyone else was on summer holiday.

The Porsche Cayman GT4 comes from the same wizards of Weissach responsible for conjuring the 2015 Road & Track Performance Car of the Year, the magical 911 GT3. As magical as it is, the GT3 is equipped only with an automatic transmission. Porsche did not make the same mistake with the Cayman GT4, which is manual only. No corporate board sat down and approved this new Porsche, and certainly no one took it to customer clinics. 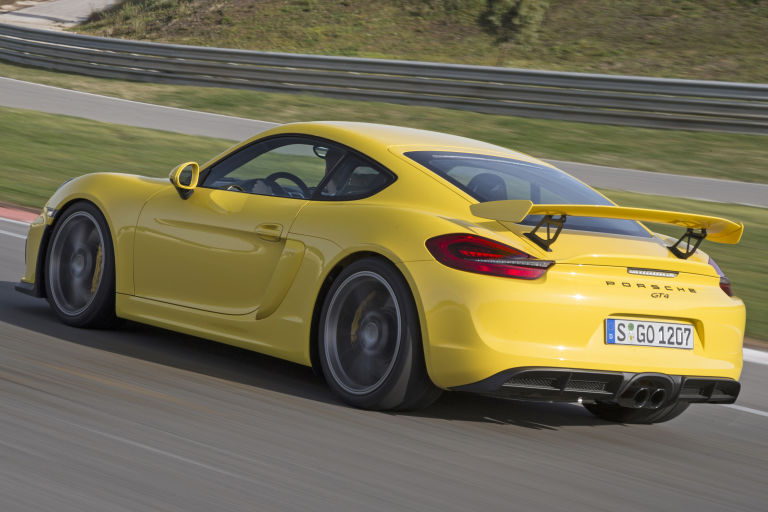 Production capacity constraints will limit the GT4 to about 2500 units worldwide, about half of which will come to U.S. dealers. And what we’re hearing, they’re all accounted for. Get yourself on a wait list now.

This new car is pure old-school hot-rod: stuff a big engine in a little car with a stick. The GT4 gets the 911 Carrera S’s spectacularly oversquare 3800-cc, 7800-rpm flat-six, with about 2.5 lbs. milled out of its 22-lbs. flywheel. It bolts to a reinforced six-speed stick that channels the power to the rear wheels through a mechanical limited-slip diff.

The GT4’s body itself is a different part number from the bodies of other Caymans. It’s reinforced in key spots (like where the fixed rear spoiler is mounted, as it contributes a good portion of the total 220 lbs. of downforce at top speed) and uses a thicker, much stronger crossmember between the rear upper strut mounts. 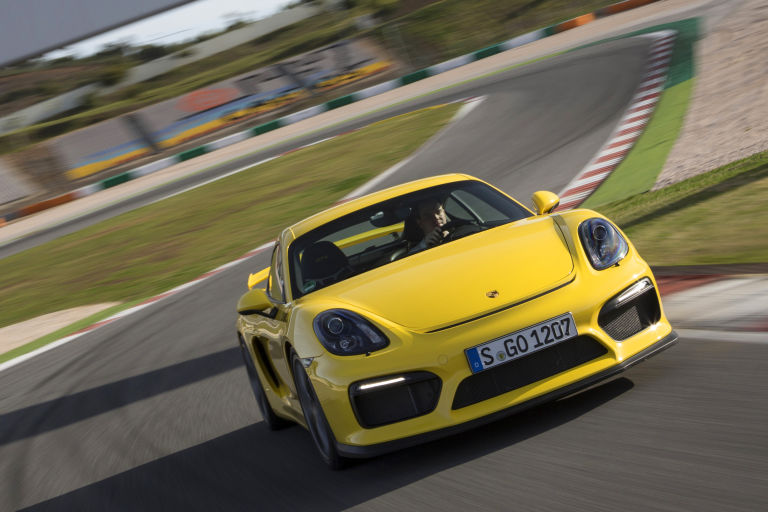 The suspension and steering up front have been plucked straight out of the 911 GT3, and the GT4 rides 1.2 inches lower than a regular Cayman. The 911’s multilink rear suspension wouldn’t fit (nor is it necessary, says Porsche), so the Cayman’s strut-type rear was completely reworked with new uprights, forged split wishbones, and ball joints at each end of the trailing arms. Shocks are upside-down adaptive Bilsteins at each corner, and hubs are of the conventional, five-lug variety. (The GT3 uses center-locks, which are expensive and difficult to torque — and have a relatively short service life.)

Rear brakes also come from the GT3, giving the GT4 what amounts to ridiculously oversized, 15-inch rotors all around. Or, you may choose the optional carbon-ceramic jobs, which are also—you guessed it—taken from the GT3. They measure a fantastically absurd 16.1 inches at front, 15.4 inches at the rear. The wheels are also huge—twenties!—and this Cayman uses 245/35-20 and 295/30-20 Michelin Pilot Cup 2 tires, which are basically a 50/50 mixture of rubber and Krazy Glue.

As it turns out, this particular mixture takes a while to warm up, allowing you some time to get comfortable in the GT4’s cabin. Our test car had the (optional) non-reclining buckets, which are swiped right out of the million-dollar 918 Spyder. They’re not generously padded, but are still comfortable. The driving position is just like a lesser Cayman’s (only lower), and the steering wheel is a half-inch smaller in diameter than the one in the Cayman GTS. 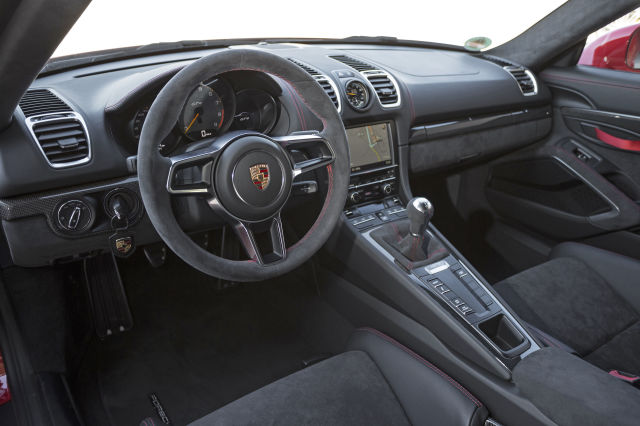 There’s very little to play with in the cabin. There’s the usual PASM button, which stiffens the shocks for glass-smooth racetracks (or to show your passengers just how much you hate them), a loud exhaust button, and a SPORT button that, thankfully, doesn’t do anything to the accelerator pedal mapping.

What it does is toggle automatic downshift rev-matching. The decision to include this option was made very late in the GT4’s development cycle. Rather than get corporate (and corporate lawyers) involved in coming up with a new name for this, the GT Team decided to just use the existing SPORT button. So there’s your explanation. It works as advertised. Use it, and you’re a poseur.

Harsh words, yes, but the single best part of the GT4 is its powertrain calibration—if you’re coordinated enough to drive a stick in the first place, you’ll master every shift on your own. It feels like the computer helping you, but it’s not—this is Porsche’s magic at work once again. 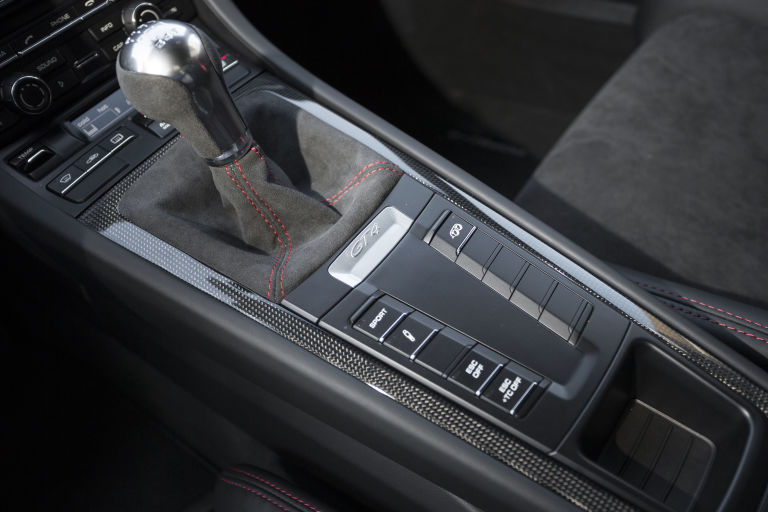 The engine is a masterpiece with a haunting, deafening, flat-six wail. Unfortunately, you won’t be hearing it pull to redline too many times in a row—like all manual-transmission Porsches, the GT4 has long, long gears. (We saw 48 mph in first, 83 mph in second. Thereafter, everything becomes a cruising gear. Shame.) At least with the big six’s enormous torque, you don’t feel trapped in the gears. Shorter ratios would mean higher peak acceleration in each gear, though probably not a faster GT4. Besides, with a 183-mph pie, each of the six slices was going to be pretty big. C’est la vie.

Porsche claims 4.2 seconds to sixty, and that certainly feels about right—in other words, it’s very quick. Porsche also claims a Nürburgring Nordschleife lap time of 7 minutes, 40 seconds—the same as a 911 Carrera S. But if you read the fine print, that’s the best-case 911, one with every possible performance-enhancing option.

We don’t doubt the laptime at all—in fact, we’d guess that Porsche was conservative with it. But in terms of feel, that must have been one hairy lap. The GT4’s stiff ride results in some considerable bounciness at the rear end.

For those of you who thought Porsche was holding back all these years, it’s just not the case: versus a rear-engined 911, a mid-engine Cayman is at a decided disadvantage where rear-wheel traction is concerned. The GT4 never steps out of line, but it has trouble putting power to the ground where a 911 wouldn’t.

At the limit on low-speed corners, the GT4 understeers more than we expected—but its overall grip levels are so high that we don’t feel the need to touch that limit again on public roads. On track, we didn’t have a single complaint. The long gearing is perfect on Portugal’s breathtaking Autódromo Internacional Algarve racetrack. Understeer? Nowhere to be found. Bouncy suspension? Nah, although the GT4’s beautiful, spoiler-adorned rear end did like to walk around under ABS braking. 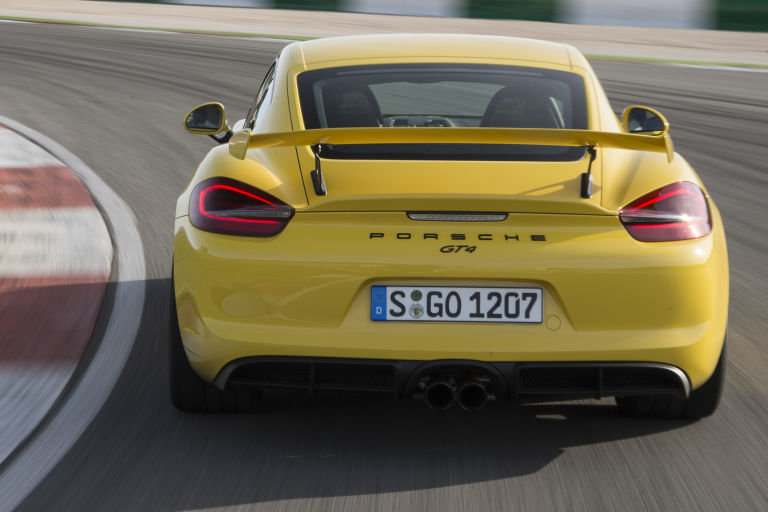 What. A. Ride. Every part of this car feels like it was engineered for racetrack duty, probably because it was. The seats are perfect, the electrically assisted steering is millimeter-precise and communicative. There is absolutely no flex or slop in the shift linkage, so mid-corner upshifts are a breeze even at what feels like 1.3 g of cornering loads. And the GT-specific stability control never slows you down.

But it does step in if you’re overly enthusiastic—so we had no choice but to switch it off. Unlike regular Porsches, GT cars’ stability control is turned off in two steps. The first disables all brake interventions (including the inappropriately named Porsche Torque Vectoring system), but keeps traction control active to stop big wheelspin.

And then, of course, you can switch it all off. The GT4’s stability control doesn’t come back on when you touch the brake pedal. You’re entirely on your own—a scary prospect with this much speed, this much grip, and almost perfectly neutral balance.

Oh, but it’s not. The verdict comes in on the final corner that leads onto the front straight at Portimão: a delightfully horrifying, slightly cambered right that drops down several stories. The GT4 dances perfectly on the edge of adhesion under three-quarter throttle, requiring the smallest possible corrections to keep it on line. When I look down in the middle of the corner, I see the dance is happening at 173 km/h. That’s a four-wheel slide at a hair under 110 mph, toward a wall, down a blind hill, and never once did I flinch.

The GT4 is that good.